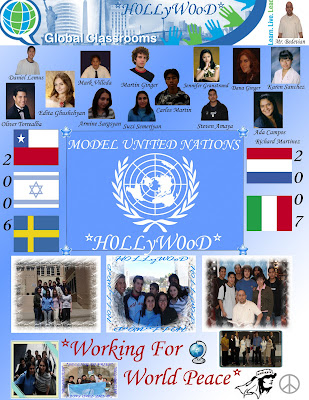 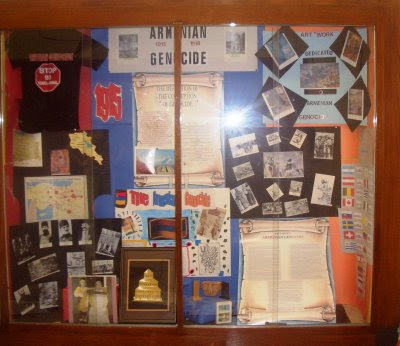 Delegates: Reminder: we will be meeting from 10am to 2pm in the library for our MUN training. Be present, on time, and ready to go. Whoever did not turn in a 1-page summary of their nation (most of you) must turn it in tomorrow. Consulates visit update: Both Italian and Dutch consulates are expecting us on Tuesday, May 29. We will be at the Italian consulate at 10am and Dutch consulate at 2pm. I will pass out field trip forms as we get closer to the field trip date. I will be asking two adults from Hollywood High School to help give us rides with their cars like last year. Read, Read, Read about Italy and the Netherlands. Read the background guides and answer the questions inside. I'll bring my camera tomorrow to take new pictures of us. -Mr. Bedevian
Posted by Ararat Student Association at 6:45 PM 32 comments:

I want to know how all of you are doing. Are you reading news about your country every day? Are you reading the background guides? I hope all of you know which nation you have been assigned and the topic/committee. If not, you must email me or email Oliver! I am working to be there this Wednesday, April 11, from 10am to 2pm. I want all of you to write a one-page report on your assigned country using the CIA factbook website: https://www.cia.gov/cia/publications/factbook/ You should give a description of your country as if you are describing it to someone who doesn't know anything about Italy or the Netherlands. The due date is Wed. April 11 when we meet. If we do not meet, I want it emailed to me by 6pm. See you (hopefully) on Wednesday. I will email you again. Please tell each other about this email.
Posted by Ararat Student Association at 9:46 PM No comments:

Hello all! I hope you had a great week, but before you get into weekend mode, here's a quick reminder of the assignment that you were assigned: 1) Research your topic and provide: - 5 facts - the best and the worst country in your topic - 2 UN documents about your topic 2) Research your country and provide: - Your country's position about your topic - Facts and statistics about your country - Other countries in your bloc (geographic center) Here are the assignments, in case you forgot: Japan & Nuclear Proliferation: Erica, Martin & Danny Australia & Darfur: Steven & Ada Honduras & Universal Health Care: Carlos & Mark UK & Environmental Protection: Richard & Caren Canada & Maternal Health: Oliver, Armine, & Edita Please have your research all done by next week & we'll start working on speeches and position papers. Feel free to email me if you have any questions! Have a great weekend, Fiona
Posted by Ararat Student Association at 8:52 PM No comments:

Hi everyone: It was decided that we have our meetings on Thursdays (if Tuesday is a shortened day) and have our meetings on Tuesdays (if it is a regular day). Therefore, tomorrow, Tues. Jan 30, is a shortened day so we will meet on Thursday, Feb. 1, after school in the library from 3:30-4:30pm. Be on time and tell everyone! See you then!
Posted by Ararat Student Association at 3:54 PM 36 comments:

Model United Nations training this week on Thursday, Jan. 25, 3:30-4:30pm, in the library. ! Our cool, school librarian, Mr. Lee, will have the laptop and projector all set up for us. Be on time and ready to go. We need everyone to attend every week so that we have a strong team! Also, on Thursday, Fiona will give everyone information about a mini-conference at USC in February. All those who are interested should tell us (Fiona and Mr. Bedevian) so we may make all the necessary arrangements. At the end of Thursdays meeting, please decide if you want to continue meeting on Thursdays or change the MUN training days to Tuesdays. Please let Fiona know.
Posted by Ararat Student Association at 8:17 PM No comments:

Q: Why should I participate in Model United Nations? A: Model UN promotes students' and teachers' interest in world around them and broadens a student's knowledge in a variety of subjects. Model UN also teaches vital skills in problem solving, conflict resolution, research and communication. Model UN also gives students and teachers the opportunity to meet interesting new people and make new friends. Q: What are some of the educational benefits of Model United Nations? A: For almost 60 years teachers and students have benefited from and enjoyed this interactive learning experience. It not only involves young people in the study and discussion of global issues, but also encourages the development of skills useful throughout their lives, such as research, writing, public speaking, problem solving, consensus building, conflict resolution and compromise and cooperation.